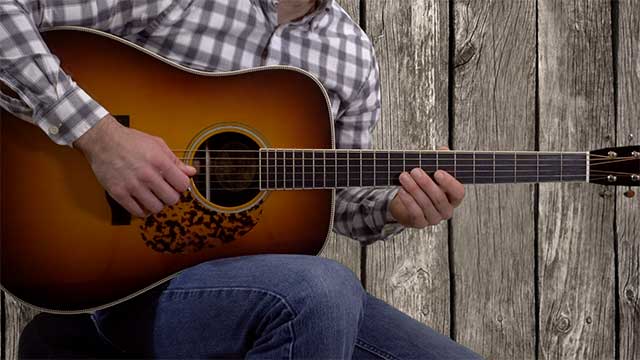 Western swing music began in the dance halls of small towns throughout the lower Great Plains in the late 1920s and early 1930s, growing from house parties and ranch dances where fiddlers and guitarists played for dancers. Throughout the 1930s and 1940s, Western Swing became very popular as a subgenre of American country music. Over the years, Western swing has been a huge influence on honky-tonk, rockabilly, and country rock. It also popularized the following in country music: use of electrically amplified instruments, use of drums to reinforce a strong backbeat, expanded instrumentation, a “honky tonk beat”, and jazz/blues style solos.

Log in or register to hear the backing track!

That sounds great. I would like to learn this one for sure

Great lesson – what is the n”normal” bpm this is to be played at?

Pretty cool. I’ve been intimidated by moving up the fretboard in a jam for fear of getting lost. This is really helping. I’ve already started to add some improv and dress this up a little. Thank you so much.