Once you know how to play the basic open chords like G, C, D, A, E, F, Am, Em, Dm, and other chord forms like sus, sus2, sus4, dom7, min7, add9, etc, it’s time to learn bar chords! Although you can play lots of songs with just open chords, your playing will be limited at times. Bar chords will add a ton of versatility to your guitar playing and several popular country and bluegrass songs are played with bar chords. 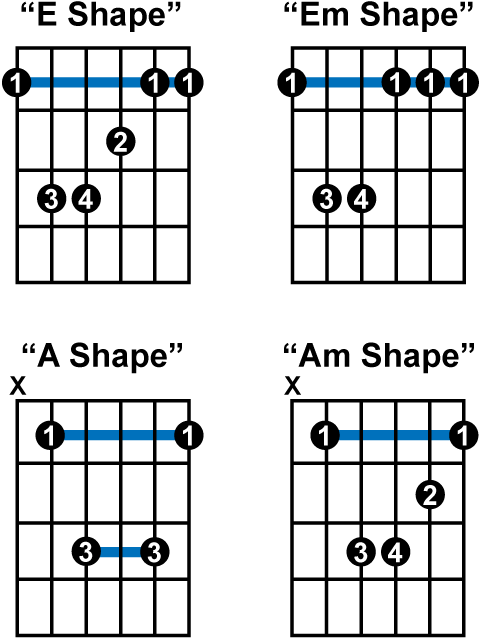 The numbers on the dots in the chord diagrams above indicate the finger positioning:
1 = index finger, 2 = middle finger, 3 = ring finger, 4 = pinky

Next place your middle finger on third string, second fret. Place your ring finger on the fifth string, third fret. Place your pinky on the fourth string, third fret. Pick all the strings one by one to make sure each string rings out clearly. If you don’t get a good sound out of each string it might be due to some of your fingers touching nearby strings or you might need to apply some more pressure on the strings using the tip of your fingers.

Now if you move the entire E major shape bar chord up a half step (one fret), you’re playing an F sharp major (F#) chord because your lowest note (the root note) is now on the sixth string, second fret, which is an F# note.

As you can see, you are able to move the E major shape bar chord to any location across the entire fretboard. As another example, if you play the E major shape bar chord with your index finger barring the third fret, you will sound a G major chord. If you move that shape up the fretboard one fret at a time, you will play the G#, A, A#, B, C, D, D#, E, and finally back to F major chord on the 13th fret.

You can move all other bar chord shapes in the same exact way. The second chord diagram, the Em chord shape, is actually an F minor (Fm) chord with the pointer finger barring across the first fret. The third chord diagram is an A# major chord or B flat (Bb). The fourth chord diagram is A# minor (A#m) or Bb minor (Bbm).

If you look at “A major shape” bar chord, you can see the lowest note (the root note) is now on the fifth string and not on the sixth string — the low E string is muted. Move the entire chord up a half step (one fret) and you will play the B major chord with the root note on the 2nd fret. Move the shape up another half step and you will play a C major. You get the idea.

Practice bar chords on a regular basis and play songs with bar chords as much as you can. Pay attention to how you place your fingers and check if you can find any errors. Replace or move your fingers if necessary. Strive to make all the notes sound clean and clear.

IMPORTANT: Memorize all the notes on the 6th and 5th string, so you’re able to easily find all the bar chords across the fretboard.